The Coolest Music in the World [via Nina Reznick]

A group of Siberian percussionists have become an internet hit with an exhibition of ice drumming on frozen Lake Baikal. In minus 20C, they found by pure chance that the one metre thick ice has a distinctive and haunting rhythm all of its own, reported the Siberian Times.

The unintentional beauty of graffiti removal Las Cruces, New Mexico-based photographer and artist Mattie Kannard has spent the past eight years photographing graffiti, but only after it has been painted over by the building owners. The results often resemble an unintentional pastiche of Mark Rothko’s style of abstract expressionism.

She explained her love for “graffiti removal” in an essay posted to accompany her Flickr album titled “Paint Over.”


“I love graffiti. But I love buff even more. When graffiti is removed, it is “buffed.” It gets painted over. As in, “Man! That tag I did last night was buffed this morning.” Before I knew the correct term, I called a buff “paint over,” and in 2009 I started taking and collecting photographs of graffiti that had been painted over. Over the last three years I’ve amassed almost two hundred pictures of beautiful buffed pieces.
Graffiti artists and property owners have an unspoken agreement to be in dialogue with each other. The artist starts a conversation with a tag, a mural, a phrase, an image. The property owner replies with a buff, a paint-over designed to erase the graffiti and discourage a repeat performance.
There’s one problem. In most cases, the paint used to cover the graffiti doesn’t match the original wall or surface paint. When people want to cover graffiti fast, they use what they have on hand – a leftover can or bucket of color, rarely even a distant cousin of the current palette. So instead of erasing the art, the buff becomes art itself… a wonderful, sometimes clumsy, sometimes precise, statement of color – an unintentional ode to what once was. This contrast, this visual band-aid, is what becomes so beautiful. The tag isn’t forgotten, it is unwittingly translated, transformed. It becomes simple, striking, an abstract skin.
Shapes emerge, sometimes vague, amorphous blobs or awkward angles, but more often geometric wonders created by paint rollers as they glide over a graffiti artist’s organic, snakelike scrawls. Corners contain expanses of color, sometimes in a neat rectangle or square. These are often the most striking buffs, but I also love the captivating, irregular shapes, the number of sides dictated by the highs and lows of the graffiti tag, the buffer’s paint roller guided by the spray can strokes of the original artist.” Hamilton Electors on The Electoral College [via Nina Reznick]

Franklin and the Iroquois Foundations of the Constitution [via Nina Reznick]

In 1744, envoys from Maryland, Pennsylvania, and Virginia met in Lancaster, Pennsylvania, with delegates, or sachems, of the Six Nations of the Iroquois Indians. During the discussions, the Iroquois leader Canassatego advocated the federal union of the American colonies, exhorting the colonists:

Our wise forefathers established a union and amity between the [original] Five Nations. This has made us formidable. This has given us great weight and authority with our neighboring Nations. We are a powerful Confederacy and by your observing the same methods our wise forefathers have taken you will acquire much strength and power; therefore, whatever befalls you, do not fall out with one another.

When an Indian interpreter and old friend of Benjamin Franklin’s brought him the official transcript of the proceedings, Franklin immediately published the account.

Seven years later, he wrote a letter to James Parker, his New York City printing partner, on the importance of gaining and preserving the friendship of the Iroquois Indians. Arguing for a union of the colonies, he mused:

It would be a very strange Thing, if six Nations of Ignorant Savages should be capable of forming a Scheme for such an Union, and be able to execute it in such a Manner, as that it has subsisted Ages, and appears indissoluble; and yet that a like Union should be impracticable for ten or a Dozen English Colonies, to whom it is more necessary, and must be more advantageous; and who cannot be supposed to want an equal Understanding of their Interests.

Despite his use of the phrase Ignorant Savages, evidence shows that Franklin had a healthy respect for the Iroquois, and his language seems intended not as an insult to the Six Nations but as a backhanded slap at the colonists—who, in Franklin’s opinion, could learn a lot from the Iroquois about political unity.  In an essay four decades later expressing unabashed admiration for the Iroquois, Franklin wrote: “Savages we call them, because their manners differ from ours, which we think the Perfection of Civility; they think the same of theirs.”

The Iroquois Confederacy had been a functioning democracy for centuries by Franklin’s day. Sometime between 1000 and 1450, the Cayuga, Mohawk, Oneida, Onondaga, and Seneca Nations came together to become the Iroquois Confederacy, and in the early 18th century they were joined by the Tuscaroras. Referred to as the Six Nations by the English, and the Iroquois by the French, the Confederacy called themselves the Haudenosaunee, or “People Building a Long House.”

Under the Iroquois Constitution, known as the Great Binding Law or Great Law of Peace, each nation elected delegates, or sachems, who dealt with internal
affairs. The Confederacy’s Grand Council met to discuss matters of common concern,  such as war, peace, and treaty-making. Though the Council could not interfere with the internal affairs of each tribe, unity for mutual defense was a central concept. The oral tradition of the Great Law uses the imagery of a bundle of five arrows  tied together to symbolize the complete union of the nations and the unbroken strength that such unity imparts.

The Great Law also provided that policies would be thoroughly debated. First the Mohawks and Senecas, or Older Brothers, debated, and when they reached consensus, the Oneida and Cayuga, or Younger Brothers, debated. If the two “houses” disagreed, the Onondaga could cast the deciding vote. If the two houses agreed, the Onondaga would implement the unanimous decision, unless they disagreed with the decision and referred the matter back to the Council.  If the Council again agreed upon their decision, the Onondaga were overruled. With its two houses and the veto power of a quasi-executive branch, this system was similar to the bicameral legislature and executive branch later found in our state and federal governments.

By the time Franklin wrote his letter to Parker, the American colonists had developed significant diplomatic and trading relations with American Indian societies, and for most of the 18th century, they had relatively friendly relations with the Iroquois, whose territory comprised a large part of what is now New York State. Today many historians believe that Iroquoian ideas of unity, federalism, and balance of power directly influenced the United States’ system of government.

Among the founding fathers, Franklin may best illustrate the influence the Iroquois had on Americans. Franklin, who had a thriving printing business in Philadelphia, started printing small books containing proceedings of Indian treaty councils in 1736. They were the first distinctive forms of indigenous American literature and sold quite well, and he continued publishing such accounts until 1762.

Franklin carried the Iroquois concept of unity to Albany in 1754, where he presented his plan of union loosely patterned after the Iroquois Confederation. Several Iroquois leaders attended the Congress, convened at an Albany courthouse, to cement an alliance with the Iroquois against the French and to devise a plan for a union of the colonies. An aging Mohawk sachem called Hendrick received a special invitation from the acting governor of New York, James de Lancey, to attend the Congress and to provide information on the structure of the Iroquois government. After Hendrick spoke, DeLancey responded, “I hope that by this present Union, we shall grow up to a great height and be as powerful and famous as you were of old.”

During the debates over the plan for union, Franklin pointed to the strength of the Iroquois Confederacy and stressed the fact that the individual nations of the Confederacy maintained internal sovereignty, managing their own internal affairs, without interference from the Grand Council.

When Franklin published his “Short hints toward a scheme for uniting the northern colonies,” his Albany Plan proposed that each colony could govern its internal affairs and that a Grand Council consisting of a different number of representatives from each colony would provide for mutual defense. This proposed council closely resembled the Grand Council of the Iroquois nations. While the colonies and the Crown were not ready for a colonial union and the Albany Plan was not ratified, Franklin gained recognition as an advocate of colonial union and a place in history as an originator of the federalist system of government.

In 1787, John Rutledge, a member of the Constitutional Convention and chair of the drafting committee, used the structure of the Iroquois Confederacy as support for the proposition that political power comes from “we, the people,” an idea later expressed in the preamble to the Constitution.

Numerous scholars believe that the Albany Plan was a landmark on the road that led to the Continental Congresses, the Articles of Confederation, and the United States Constitution.

In 1988, the 100th U.S. Congress passed a concurrent resolution acknowledging the contribution of the Six Nations of the Iroquois Confederacy to the development of the U.S. government.  This same spirit of acknowledging the influence of the ancient Iroquois on the new United States was captured poetically by Oren Lyons, chief of the Onondaga Nation, in an interview with Bill Moyers. Declaring Franklin a visionary who brought Indian ideas of democracy, freedom, and peace to America, Lyons said of the founding fathers:

Buried deep underground in the English town of Margate, Kent, is a grotto shrouded in complete mystery. Adorned with 4.6 million shells and 70 feet of winding underground passages leading to a rectangular chamber, this shell grotto is undoubtedly a remarkable site to behold. 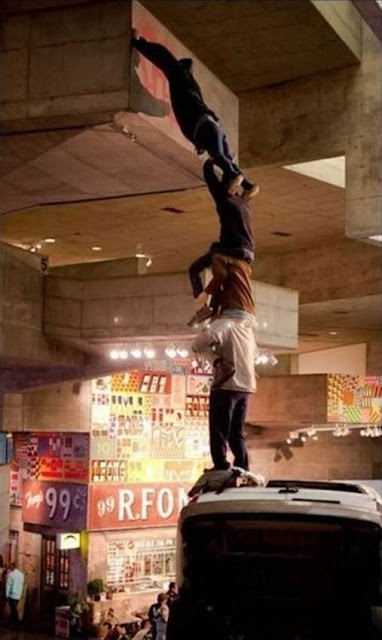 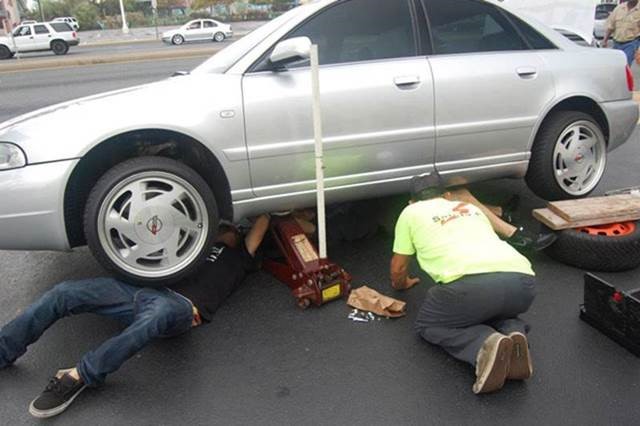 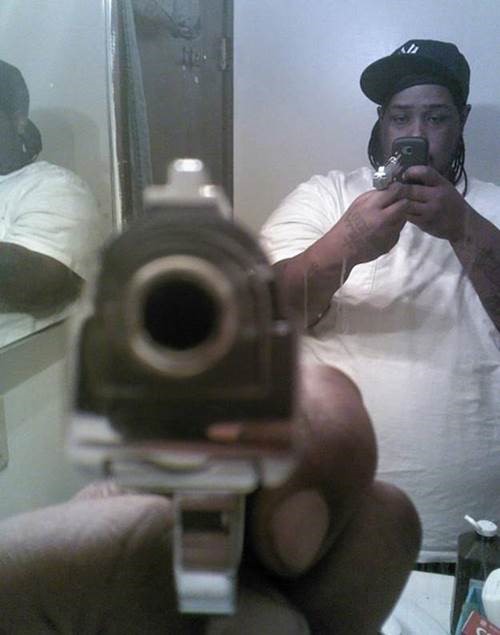 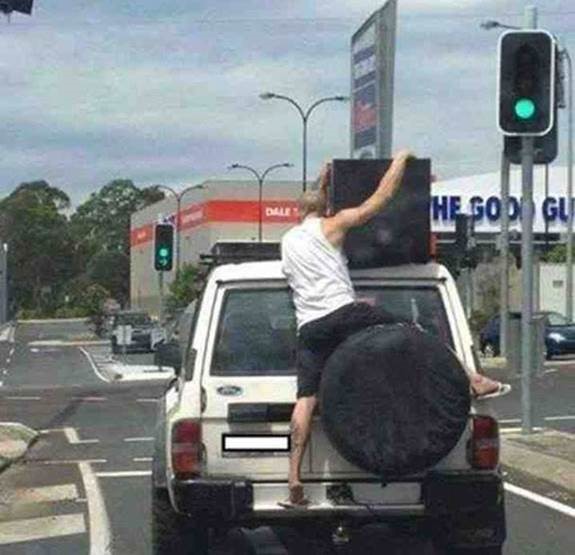 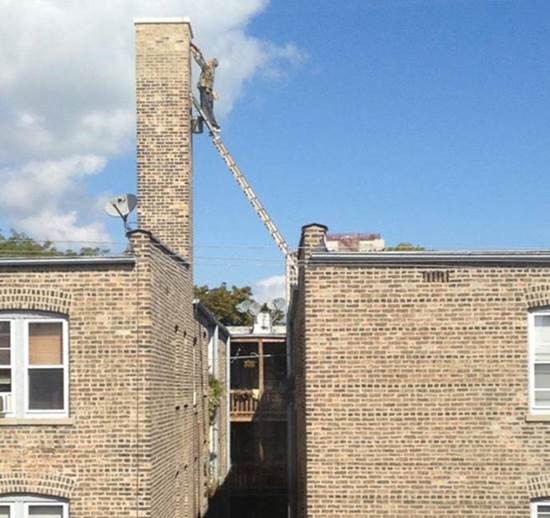 Adorable: Bird on a Moving Sidewalk [via Nina Reznick] 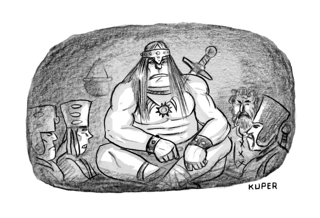 “I said, ‘Crush your enemies, see them driven before you, and hear the lamentation of the women,’ but the media took that totally out of context.”
at 12:00 AM No comments:

Karim Sulayman - I trust you [via Mardeene Mitchell]