Attention happy campers, just in time for Halloween let’s go back to Waco GA, October 1988. For your trick-or-treat pleasure, a news feature with behind-the-scenes footage about the making of Sleepaway Camp 3: Teenage Wasteland.

(We actually wrapped principal photography of SC3 on Halloween Day!)

This Japanese Photographer Specializes In Shooting Ninja Cats, And The Result Is Too Purrfect

Turns out, cats know more martial arts than ninjutsu. Japanese photographer Hisakata Hiroyuki has decided to dedicate a fair portion of his time to shooting cats during their totally serious combat practices, and the result is purrrfect.

Threatening stares, explosive kicks, powerful punches, Hiroyuki has captured it all. He has successfully proven that felines have unlocked all of the secret fighting techniques, and even Mr. Miyagi could learn a thing or two from these martial arts masters. Why a song gets stuck in your head

Cassini Interrupted: How a Hippie in a Lawn Chair Delayed the Launch [Via Ron Pontiac] After a journey of 4.9 billion miles the Cassini Orbiter has disappeared into the object of its obsession, the planet Saturn.  Six moons, two oceans, three seas, and hundreds of small lakes were among the discoveries made.  Here’s hoping 72.3 pounds of plutonium didn’t trigger a disaster in dimensions of Saturn beyond our senses, or to a future Saturn which we can’t comprehend.  Or perhaps we just accidentally provided a mutation that will bring the planet to life some day?


The story of how the first launch got scrubbed begins with a thunderstorm shaking a tin shack on a Sioux reservation in early October 1997.  A respected grandmother had a dream of the eastern seaboard in flames.  Grandmother’s dreams always came true.  She didn’t understand the dream until a story came on the reservation radio station about the Cassini launch, only a few days away.  Grandmother believed that the dream was a warning about the rocket exploding, drizzling plutonium all over Florida and the world.

She didn’t know what to do about it so she told her daughter. Now it was her daughter’s problem.  What could she do?  How could she possibly warn anyone?

So she called our mutual friend Kevin Marsh, a very cool indigenous cat in the immediate crew of the late great John Trudell.  Back in the day Kevin had been the driver for Miceli, the owner of the first Italian restaurant in Hollywood, CA.  But Kevin matured into a multiple Emerald Cup winning legal marijuana farmer, one of the pioneers of the movement.

Kevin groused around the house until his wife Darlene told him to take it to the local Humboldt CA radio station. The DJ being a friend of Kevin’s the predicament was offered up to listeners.  If they were willing to raise some money to send Kevin to Cape Canaveral he would do his best to figure out something to do to stop that launch.  To Kevin’s surprise donations poured in.  People even walked and drove to the station to drop off cash.

So Kevin went straight to the airport.  When he arrived in Florida a relative of a listener who had donated to Kevin’s trip recognized him.  Now Kevin had a driver.  But where did he want to go?  He figured he should go to Cape Canaveral. As his ride dropped him off, Kevin surveyed the scene.  A tourist area.  Formidable security gates.  Surveillance equipment.  Deadly force.  The rest was a swamp.  What could he do?  He decided to pull up a lawn chair and have a seat.   “What was he doing there?” An officer and soldiers who ventured out wanted to know.

Kevin explained that he was protesting the launch of a deadly amount of Plutonium.  He said grandmother had a dream and grandmother’s dreams always come true.  The officer explained the rules.  If Kevin fell asleep they would arrest him.  His protest was protected by law only as long as he could stay awake.
Then began one of the most amazing, unlikely and little known acts of protest in American history.  There followed a series of strange visitations.

A retired fellow in a red outfit on a matching bicycle brought some supplies and explained that Kevin could use the bathroom and water fountain in the tourist hospitality area.  They could not deny him that.  He kept watch while Kevin took a nap.  As long as somebody was awake in that lawn chair the protest continued.
A biker with a parrot drove up from Christmas, Florida to share some supplies and encouragement.  He invited Kevin to visit after Oct. 12. Maybe Kevin could inspire the people there to fight for their rights in a town overrun by corruption and greed.

But then there were the tempters.  The shady guy out of nowhere offering to sell Kevin meth so he could be sure to stay awake.  Kevin explained he didn’t do meth but he was willing to share his weed.  The shady guy pointed out the illegality of weed.  But Kevin told him about being one of the first legal marijuana farmers in California.  Pulling a recorder out of his pocket the narc took out the tape and destroyed it.  He confessed that weed helped his mother with her medical problem more than any prescription.

A Corvette convertible with the top down drove out from inside the base. The sexy female driver offered Kevin a feast, some cocaine, her hot tub and her soft fluffy bed.  Kevin pointed out that the wedding ring he wears on a chain around his neck is there to remind him not to accept such invitations.

Several days passed this way with Kevin in his folding chair by the swamp.  A worker gave him hell because somehow he felt Kevin’s protest threatened his job.  The daughter of the base commander showed up to share some of her own excellent weed and to shoot the shit.  She thought what Kevin was doing was pretty damn cool. She told him about the night she snuck inside a nuclear sub and graffitied the control room with peace symbols.
Then a local reporter covered the story. Some crazy hippie was sitting out in front of the base.  A group of high school jocks showed up to question Kevin about his motives.  Once he explained they asked if they could protest, too.  They didn’t even know they had the right.  They returned the next day with their parents, many fellow students and some teachers.  A star football player carried a sign that read: “NASA sucks alien cock.”

Soon more reporters gathered and more.  Then the networks arrived.  Protestors professional and amateur, locals and travelers, poured into the area.

Oct 12 arrived.  As the countdown began some protestors swarmed the gate.  The few who made it over the first fence, under the watchful gaze of snipers, were immediately arrested.  Helicopters in the air and gun boats in the water added drama to the already dramatic countdown.  Kevin didn’t know what to do.  He had done everything he could.  When asked he told the protestors to form a giant peace sign and pray.

As Kevin walked past a news van rumored to have Dan Rather inside he heard someone loudly carping that he was not be bothered with such a ridiculous story again.  The door of the van opened and a crumpled up piece of paper fell directly into Kevin’s path.  Naturally, Kevin picked it up.  He found a fax about a judge in Hawaii ruling that NASA had not satisfied the requirements for a full environmental report before the launch.

Kevin took that sheet of paper straight to the gate of Cape Canaveral where he demanded that the soldier on guard take him to the base commander, there Kevin would make a citizen’s arrest.  The soldier was dumbfounded.  So was the officer that followed.  And his superior, too.  They all stood around until a limo pulled up inside the base.  By now the local sheriff had gotten involved and as is usually the case the local authorities and the federal authorities did not exactly see eye to eye.  The sheriff took that sheet of paper from Kevin and she walked to that limo and got inside.  We don’t know what was said but we do know the launch was scrubbed.

Jubilant protestors celebrated. Kevin sat exhausted in his folding chair answering questions and saying you’re welcome.  After everyone had their moment, a personable woman with blonde hair approached Kevin. She introduced herself as an Assistant Press Secretary to the President of the United States.  He remembered seeing her on the news a few times.  She offered to drive him to the airport if he was ready to go home.

On the road she told him that no leaders of government stayed on the eastern side of the United States on that day for fear of grandmother’s prophecy.  She thought he also deserved to know that as soon as the launch had been scrubbed technical problems were found.  NASA insisted the cancellation was due to weather and minor technical issues.  But is any technical issue minor when you’re launching 72.3 pounds of plutonium on a rocket?

The Press Secretary drove Kevin to a nearby trailer park where the mysterious man in red could not be found.  No one had ever seen such a person even though he had told Kevin he lived there.  She drove him to Christmas, Florida, too, where she heard the stories of the locals and promised to tell the president.  Then she dropped him off at the airport, with a silly grin on her face at what this rough looking character from the west had done by simply sitting in a lawn chair.

It’s odd that Getty’s photo of Kevin at Cape Canaveral is labeled the only protestor at the launch.  AP provides a pic of the Grandmothers for Peace and many other protestors at Canaveral the same day. I didn’t believe this story either when I first heard it.  But Kevin provided a folder of press clippings.  I could see photos of media trucks and groups of protestors with signs and flags.  A clipping from a local newspaper included a photo where half a sign was visible.  You could easily tell that the missing letters spelled out “NASA sucks alien cock.” In Ravenna, Italy [via Nina Reznick] 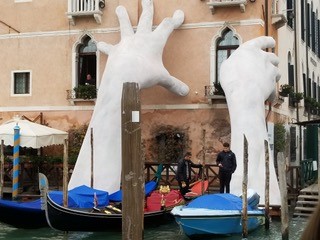 KJA: I wish I could be perfect like you and your father.

Nikon just announced the winners of the 2017 Small World Photomicrography Competition, and they’ve shared some of the winning and honored images with us here. The contest invites photographers and scientists to submit images of all things visible under a microscope. More than 2,000 entries were received from 88 countries in 2017, the 43rd year of the competition.