Even though his broad smile always came easily, America’s thirty-fourth president, Dwight D. “Ike” Eisenhower (1954—1961), instead must have laughed gleefully in his eight years in the White House. For his pension portfolio, like those of other Americans, was in a catch-up mode; and legislation he pushed and signed was a very important economic stimulus bill, passed in Congress by wide margins.
Ike and most American investors profited from the powerful head winds of the colossal World War II bull market ex post, during which the S&P 500 Index soared by  397.3 percent in real dollars, over the fifty years following the Pearl Harbor attack in 1941. The bill Ike backed became one of those game changers in the stock market. Just during his eight-year stay in the White House, the Dow climbed higher by 152.7 percent, in real dollars, not far from doubling. Another way of stating this is that in approximately one-sixth the time, stock performance during Ike’s market watch was 2.6 times greater than average eight years in the stock market’s 50-year bull market.* 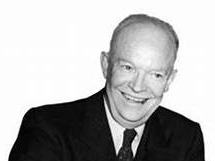 In a grand way, the market bonanza was like a bonus presented by Lady Luck to the thirty-fourth president, who had been Supreme Commander of the Allied Forces in Europe in World War II. In that role, he oversaw the fierce Normandy amphibious invasion onto the shores of northern France in 1944. Sloshing and zigzagging like crazed attackers, Allied attackers dropped or advanced in a display of raw courage that shifted the winning of the war from the fascist Axis powers to America and her Allies.

As president, Ike signed the economic stimulus bill—“the Federal–aid Highway Act of 1956”—on June 29, 1956,  in the first year of his second term. Ike worked hard for its passage; however, mostly he urged it becoming law as a national defense bill. Capital expansion of infrastructure like roadways, underpasses, overpasses and bridges had become stalled in wartime America, as had most other industrial sectors.
The new interstate highway program created a 41,000 –mile “national system of accessible interstate and defense highways” which would also allow quick evacuation, in case of nuclear attack on key cities. Proof of its vital need to the nation was that thirty-five years after its origin, additions were still being made on the gigantic plan.

Figured in 2016 dollars, the bill injected directly $499 billion into the US economy. In addition, the multi-year program had a huge multiplier effect on new construction and production of modern highways, automobiles, trucks, buses, motorcycles, motels, restaurants, service stations, stores, office buildings, aircraft and airports, near highway turnouts. Today it is called simply,”The Interstate,” and makes it possible for a driver to travel on any highway in the system, and exit by others.

But to Romantics, Old Route 66 Was the “Mother Road” of America

Sadly, for auto and motorcycle romantics, the behemoth driving system replaced old Highway 66, America’s legendary fun road going west. You know the one—“Get your kicks on Route 66”—that King Cole sang in  mellowed tones.
Travel on the Chicago to Los Angeles road peaked in the 1930’s and 1940’s. BURMA SHAVE company had placed 7,000 signs along the route. The red and white advertisements furnished precious giggles to road-weary riders, during the somber days of the Great Depression and World War ll. Each line of a verse appeared on a separate sign, posted about 25 yards apart, along the road side.
Here’s a sample verse from the BURMA SHAVE Archives: 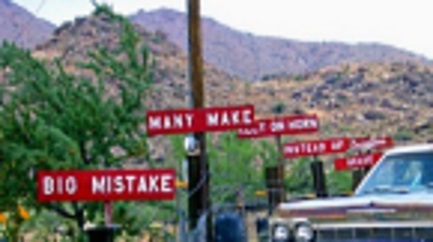 “Don’t lose your head
To gain a minute
You need your head
Your brains are in it.
BURMA SHAVE.”

In regard to the interstate highway system’s feature of offering quicker evacuation from a nuclear attack, the US and countries in western Europe feared such attacks immensely, after WWII ended. (And they still do, of course.) Populations became keenly aware of the leveled destruction of Hiroshima and Nagasaki in Axis Japan, besides the killing of over 200 thousand inhabitants. The US Air Force thusly ended WW II suddenly, with only two bomb drops in August of 1945. Nazi Germany had surrendered a few months earlier, in May 1945.
During the war, the US and Russia were strange bedfellows; at first they were enemies, but when Hitler invaded Russia unexpectedly in 1941, they became allies, in a prime display of quick thinking by Russia. After the war, Russia and the US became extreme enemies again, especially so after Russia tested an atomic bomb in 1949. Both nations strived to  militarily and economically dominate key zones of the world; and the places sought were fraught with agents, human shadows performing dastardly deeds aimed at thwarting the enemy. They were considered the two superpowers in the world, for they had the arms and, of course “the bomb.”

When the Berlin wall came down in 1992, and the Soviet Union politically imploded in the rest of the 1990s, the US became the lone superpower in the waning years of the 20th century. Today, Russia causes trouble with America and the West only as a regional power, while China races en route to challenging the US as the world superpower.

As for Ike, after the war he became Army Chief of Staff, did a short stint as president of Columbia University, and accepted President Truman’s request to bolster the infant NATO as Supreme Commander of that new european defense organization, from 1951 to 1952. Then, running as a Republican, he won the presidency of the United States, the first Republican since 1928 to do so. Finally, he and his First Lady, Mamie, retired for good on a farm they had bought earlier, near the site of the critical battle of the Civil War—Gettysburg!—near Gettysburg, Pa.

This all sounds right for one of America’s most heroic generals; well, yes, but what about his missing an extraordinary career on Wall Street by winning the American presidency, and who inspired Congress and investors to drive the stock market upward more than any other president ever has.

Runner-ups in this White House stock market derby are Presidents Bill Clinton and the 137.6 percent stock hike in his presidential terms, Calvin Coolidge and a 124.6 percent gain, Ronald Reagan’s 117.2 percent increase and Barrack Obama’s 108.4 percent increment. These market gains go beyond the 50-year bull market referred to above, however.