Napaman's Best Wines of the Year

Napaman’s Best Wines of the Year -- And the top wine was white! When the white wine at dinner blows all the heavy-hitter reds out of the water, you know you’ve had a special wine. Which was certainly the case for this wine, making it qualify for Best Wine – Red or White – of the Year.

In fact, at one dinner, it actually outscored all of the best reds, which I tasted this year, making it the first time ever that my highest scoring Best Wine of the Year is a white.

I brought a bottle of the 2005 Marius DeLarche Corton-Charlemagne Reserve to dinner at Bardessono, in Yountville, thinking the white Burgundy might make a pleasant dinner opener. Little did I suspect it would be the wine of the dinner… of the night.. and of the year!

The perfectly aged, 5-year-old wine had rich butter notes and a surreal finish of fruit, lingering in the mouth for a good 30 seconds.

Exhibiting sensational richness of fruit and a dreamlike weight in the mouth, this wine rated 98 points. Picky-picky, probably should have been 99 or 100.

Our dinner hosts, Rob and Lexi Adler, brought a sumptuous 1998 Valpolicella to dinner and I brought several additional wines, including a 1999 Barolo and a 2000 Les Cailloux Chateauneuf-du-Pape, but these killer reds just didn’t have the magic of the DeLarche.

I was so enthralled with this Corton-Charlemagne, in fact, that over the next two months, I pulled additional bottles from my cellar. One bottle was a close, 97 point, experience, while the other was a distant 93-pointer. Never forget: bottle variation is alive and well in even the most expensive, most pedigreed, wines in the world. The year was barely a week old when we opened what was one of the top wines of the year to come!

Carol and her twin sister, Shelly, celebrated a significant birthday at one of our favorite Napa Valley restaurants, Tra Vigne. For the occasion, I brought along a magnum of 2003 Pine Ridge Cabernet Sauvignon, Stags Leap District.

The wine blew away everything else on the table, and there were a considerable number of bottles on the table. The Pine Ridge was harmonious, balanced, filled with ripe red and black fruits, and loads of personality.

If this wine were a car, it would be an impressive, 500 horsepower, BMW M6, capable of blowing away the competition with elegance and speed, given the firepower under the hood. This was the single best bottle of Pine Ridge, (a perennial favorite in our cellar), which we’ve ever had. 97 points. 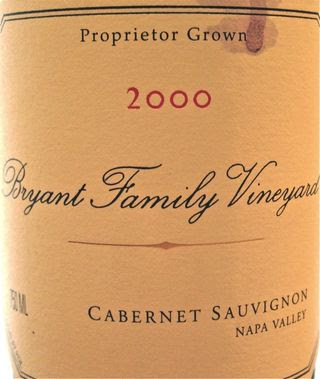 Friends brought a bottle of 2000 Bryant Family Vineyard to dinner, while we brought a 1995 Leoville las Cases. Parker scored them equally 95 points upon release.

I thought our Las Cases, a St. Julien Bordeaux with great pedigree, showed insufficient complexity and had muted, muddled, top and bottom notes. A rather punk bottle, barely worth 91 points.

But the Bryant Family Cab – ahhh, symphonic bliss in a bottle. Syrupy thick, texturally rich (very silken), and alive with juicy flavors. Loads of ripe black fruits, a hint of chocolate, too. Couldn’t get enough of this one, and scored it 97 points.

The 2000 Bryant, like all vintages, was produced from 100% Cabernet, and was the handiwork of winemaker Helen Turley (from the first vintage in 1992 through 2002).

The premium today on this 10-year-old wine is somewhat staggering. Wine merchants across the country are charging as much as $700 a bottle, considerably more than what this wine cost on release, when 800 cases reached the market. I guess wine lovers have discovered how good this wine is – and apologies from napaman for putting additional pressure on pricing with this encomium. Our good table mates, Barry Stern and Lea Kendall, joined us at Cantinetta Piero last April, bringing with them a bottle of 1999 Domaine du Pegau.

Barry and Lea had brought the 1998 vintage of this wine to a dinner last year, earning them – and the wine – top spot in our Best Wines of 2009. I scored the 1998 vintage a perfect 100 points. It was Napaman’s Wine of Last Year.

The 1999 vintage isn’t far behind in finesse or finish. It’s an arousing wine, filled with herbs, leather, ripe red berries, and a Virginia tobacco denouement. In a word: Delicious.

Imagine having two wines, this 1999 Pegau and the 2000 Vieille Julienne (description follows) at the same table with some mighty impressive food. Life doesn’t get much better. 97 points for the Pegau. 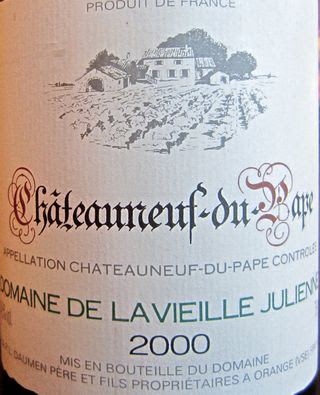 As mentioned, we dined with Barry Stern and Lea Kendall at one of our favorite new restaurants, Cantinetta Piero, in Yountville, where they serve very well prepared Italian fare. Of particular note is their selection of mixed, house-cured salume, which makes an ideal table starter.

On leaving home, I had grabbed the 2000 Vieille Julienne Chateauneuf-du-Pape, curious to see how the wine was evolving. I’d had one bottle earlier out of a six-pack I own and recall that it was a stunner; perfectly focused, elegantly dressed, ready for prime-time, a knock-out of a wine.

The bead, texture, and finish on the bottle opened with Barry and Lea were all in perfect harmony. 97 points.

For the record: Five months later, in September, we had a third bottle from my half-case and it was equally as impressive; uber-complex, almost syrupy thick, a great rush of flavors followed by a lengthy middle palate revealing dark fruits, bramble, and garrigue. 97 points again. 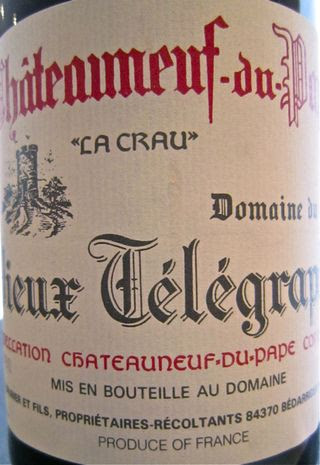 This was the single best bottle of this vintage, which I’ve had from two cases purchased upon release from Kermit Lynch, in Berkeley.

We enjoyed this wine at the home of Tom and Linda Scheibal. Tom had gone into the wet forests south of Calistoga in the morning to forage for mushrooms. He found a gold mine of fresh chanterelles and picked and stuffed 15 pounds into a pillowcase. Linda, who is an extremely talented cook, made fresh egg pasta, and tossed the barely-sautéed chanterelles into her lighter-than-air, golden tagliatelli.

In general, I have been disappointed with many of my 2000 vintage Chateauneufs-du-Pape. The vintage was initially described as stellar, but I have found many 2000s, including earlier opened bottles of Vieux Telegraph, to border on austere and angular, certainly from what critics hailed as a “great vintage.”

But this 2000, from one of my favorite workhorse houses, was simply sensational. It displayed fresh ripe red fruit, had vibrant top notes and a chorus of flavors at the finish, all singing in harmony. An ideal complement to Linda’s dinner. 96 points.