JOYS OF ENGLISH [via Cacciatore}


Homographs are words of like  spelling but with more than one meaning. 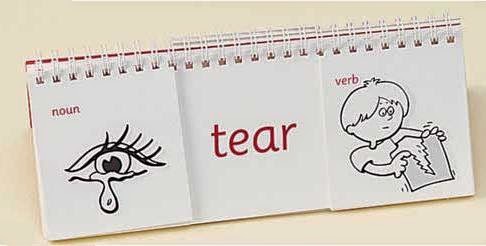 1) The bandage was wound around the wound.
2) The farm was used to produce produce.
3) The dump was so full that it had to refuse more refuse.
4) We must polish the Polish furniture..
5) He could lead if he would get the lead out.
6) The soldier decided to desert his dessert in the desert..
7) Since there is no time like the present, he thought it was time to present the present.
8) A bass was painted on the head of the bass drum.
9) When shot at, the dove dove into the bushes.
10) I did not object to the object.
11) The insurance was invalid for the invalid.
12) There was a row among the oarsmen about how to row.
13) They were too close to the door to close it.
14) The buck does funny things when the does are present.
15) A seamstress and a sewer fell down into a sewer line.
16) To help with planting, the farmer taught his sow to sow.
17) The wind was too strong for me to wind the sail.
18) Upon seeing the tear in the painting I shed a tear..
19) I had to subject the subject to a series of tests.
20) How can I intimate this to my most intimate friend?


Let's face it - English is a crazy language. There is no egg in eggplant, nor ham in hamburger; neither apple nor pine in pineapple. English muffins weren't invented in England or French fries in France . Sweetmeats are candies while sweetbreads, which aren't sweet, are meat. We take English for granted. But if we explore its paradoxes, we find that quicksand can work slowly, boxing rings are square and a guinea pig is neither from Guinea nor is it a pig.

And why is it that writers write but fingers don't fing, grocers don't groce and hammers don't ham? If the plural of tooth is teeth, why isn't the plural of booth, beeth? One goose, 2 geese. So one moose, 2 meese? One index, 2 indices? Doesn't it seem crazy that you can make amends but not one amend? If you have a bunch of odds and ends and get rid of all but one of them, what do you call it?

If teachers taught, why didn't preachers praught? If a vegetarian eats vegetables, what does a humanitarian eat? Sometimes I think all the English speakers should be committed to an asylum for the verbally insane. In what language do people recite at a play and play at a recital? Ship by truck and send cargo by ship? Have noses that run and feet that smell.

How can a slim chance and a fat chance be the same, while a wise man and a wise guy are opposites? You have to marvel at the unique lunacy of a language in which your house can burn up as it burns down, in which you fill in a form by filling it out and in which, an alarm goes off by going on.


While dogs have a way of getting what they want, usually by being cute or lovable, one pooch in McDonough, Georgia, really took the cake for being the most ingenious canine in our books. After having gotten out of the house one night, Chika, a Labrador mix, wanted back in, and so guess what she did? She rang the doorbell, and it was captured in an adorable video.
Eventually, her human Rob Fox let Chika in from the chilly fall night.

Later, the recording, captured on a RING doorbell device, was posted on Reddit, and Chika became an internet star. He joked that “in another video I won’t be sharing is me in my underwear two minutes later letting her in.”


Unearthly, transparent and beautiful—and also exceedingly delicate. The spotted comb jelly is so fragile a creature, just waving your hand through the water could destroy it. Now, for the first time anywhere, our animal care staff have managed to culture these fragile, scintillating creatures.

Several of the newly hatched jellies are now on public display. It’s the latest advance in comb jelly science from our husbandry team.

The species, known scientifically as Leucothea pulchra—Latin for “beautiful sea goddess”—is “a clear football-shaped gelatinous animal” says Wyatt Patry, a senior aquarist who’s worked at the Aquarium for 11 years, and who led the culturing effort this winter.

The spotted comb jelly’s common name refers to orange “knobs” or spots along its body.

“We don’t know what those do but we suspect they aid in prey capture,” Wyatt says. Two sticky tentacles trail behind it, acting like fishing lines.
“They also have cool whips called ‘auricles’ that they wave around—undulate—in this really cool slow wave motion, probably driving food into their mouths,” he says.

“They are voracious predators—kind of top of the food chain as far as plankton goes,” eating small crustaceans like copepods, mysid shrimp and krill, Wyatt says. They also feast on pelagic worms and larval fish. The team was also surprised to discover that “they will happily eat other jellies. That was something that we did not know.”

Spotted comb jellies are not endangered, and range from Baja California north to British Columbia. But seeing them in an aquarium is a rare treat, because their extreme fragility makes handling them a dicey proposition.

Wild specimens first went on exhibit in Monterey in 2002, as part of the special exhibition, “Jellies: Living Art.” On rare occasions, and for brief periods, they’ve returned to the exhibit galleries.

Wyatt calls them “a contender for the most delicate animal on Earth.” Another researcher once described them as “barely organized water.”

To protect the easily broken beauties from perturbations, Wyatt says members of the team “have to move like a sloth. In order to move them we’ve got to get a beaker around them, and that has to be done very, very slowly. We try to get them to swim into the beaker so we don’t have to disturb the water around them.”

Just wiping down the acrylic inside one of their holding tanks requires the slowest of motions; a task that would otherwise take only a couple minutes requires twenty.

In the wild, they take refuge at depths up to 300 feet below the surface, “to get away from all the waves and the swells and commotion up above,” Wyatt says. But they also show up in Monterey Bay in late fall, when surface waters are warm and calm.

That’s where Kevin Lewand, the Aquarium’s collector, found four adult Leucothea one Friday in early December. He brought them back to the Aquarium’s Drifters Lab, where Wyatt set up a six-foot-tall tube designed on site for culturing ctenophores.

“Over the last two years, we’ve really kind of excelled at comb jelly culture here at the Aquarium,” Wyatt says, “so we were really ready to receive and work with Leucothea immediately.”

Here he credits his partner Tommy Knowles, as well as Michael Howard and MacKenzie Bubel.

Within days, the collected adults, which ranged from 12 to 18 inches long and are capable of self-fertilization, had spawned thousands of hatchlings, each half a millimeter in length—a size easily mistaken for a mote of dust. Astonishingly, Wyatt says, “when they hatch, they’re ready to eat prey as big as they are.”
The Aquarium now has dozens of spotted comb jellies on hand. Some grew to four inches long in just two months.

George Matsumoto published the first official description of Leucothea pulchra in 1988, though it was earlier described in 1931 in an unpublished master’s thesis by Stanford student L.O. Stanford.

“It was named by the master’s student, and in deference to her work, I kept the unpublished name,” says George, a senior education and research specialist at the Monterey Bay Aquarium Research Institute. The name translates as “beautiful sea goddess.” (In Homer’s “Odyssey”, Leukothea is a sea nymph who rescues Odysseus from drowning.)

Among his observations, George found some specimens with empty stomachs, some with just a few tiny crustaceans inside, others that had eaten worms, and one that had eaten dozens of tiny sea snails.
“So, it appears that they can be picky eaters, sorting out what each individual prefers,” he says.

That the Aquarium has managed to culture the species is “amazing” to George. “I never had much luck keeping them in captivity for more than a day, so I’m completely gobsmacked.”

In more than 30 years, it’s simply not something he ever thought would ever be likely.

“If asked about the possibility, I would’ve estimated less than a 5 percent chance of success—so kudos to the team,” he says.
Successfully culturing a species often opens the door to sharing subsequent generations of offspring with other public aquariums. But Wyatt, having gone to great lengths to put a few on display, doubts it’s realistic in this case. These jellies, he says, are too fragile.